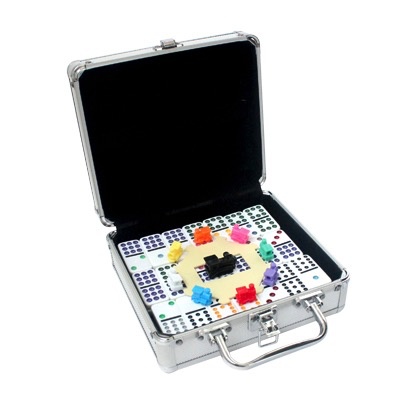 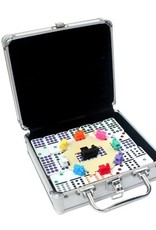 Object: Be the first player to play all of your dominoes.  Dominoes are played on your train, other players’ trains and the Mexican train.

Shuffle dominoes face down, this is known as the "train yard." The number of dominoes (box cars) dealt to each player, is determined by the number of players as follows:

After the box cars (dominoes) have been dealt, players organize their box cars face up. The player with the highest double begins the game. The highest double serves as the "engine" for the game and is placed in the centre of the train station hub.

Playing The Game: The player who has the highest double begins the game by placing the double in the centre of the hub (as the 'engine') and starting their own personal train (if they are able). Each player must begin building his personal train by playing a box car with an end that matches the engine. (example: with 12-12 as the engine: 12-5, 5-7, 7-8, 8-11, 11-1, 1-9, and so on). Players build their personal train out from a "track" on the train station hub nearest to them. If a player has no box cars to start his personal train, he may draw in turn from the train yard until he can begin play. Each player plays one tile per turn, the only exception of this rule is when a double is played (see "doubles"). If a player has a tile that is playable, he MUST play that tile.

The job of completing the double is then transferred to the next player to the left. After a double is played, all regular play is suspended until someone can complete the double.

Last Tile: When any player plays their second to last box car, they must inform the other players that they have only one remaining box car by tapping their final tile on the table or with their marker. If another player catches the player failing to do so, the faulty player must draw another two box cars from the train yard. This allows other players an opportunity to lower their ending score by ridding themselves of high numbered tiles on their next turn.

Winning the Game: The game is over when one player has played their last tile or when the game is blocked because no player has a playable tile and the train yard is gone. If a player has no remaining tiles, they are the winner. If the game ends and no player has played their last tile, then all players must total the number of pips (dots) on their remaining tiles. Each blank scores 25 points and the double blank domino scores 50 points. The player with the lowest score wins.

Faster Game Play: To make each round go faster, each player may play as many tiles as possible onto their personal train on their first turn. After this first series of box cars are played, players may only lay down one domino for each turn.